Odessa, TX – With the official UIL announcement of its decision to halt school sports across Texas, many senior athletes have felt the affects almost immediately.  What started on foreign soil has made its way to not only disrupt professional leagues like the NBA, MLB, and NHL in the United States, but sports right here in the Permian Basin. 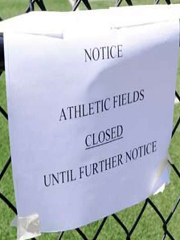 As the health concerns have risen over the coronavirus (COVID-19), no one could be more disappointed in the cancellations than the Permian High School boys and girls soccer teams.  Both qualified for the state playoffs this past week and were looking to end the regular season slate of district matches tomorrow in Amarillo against Tascosa.  The anticipated excitement of the Bi-District match sometime this weekend has now been replaced with dismay.

The track and field teams across the area are facing similar feelings. Their seasons are midway into the scheduled relays, with district qualifying meets coming the first week of April.  Those dates destined to change, if not be completely scratched.

Mojo cross country and track standout Joshua Garcia is taking it all in stride, “If this is the end for me at Permian, it’s been a hell of a run – literally and figuratively.  I feel the closure is affecting time with some of my friends. After high school, most of us will go our separate ways.” Garcia is hopeful but fears track season is done.  “I have a feeling the season won’t be re-open due to all collegiate and professional sports being completely canceled. However, the school year will continue on I believe.“

Ector and Midland ISD boys and girls gymnastics teams have been preparing for the District 2-6A Championships that were supposed to be held on March 26-27 in Abilene. Many of the participating athletes have had high hopes of reaching the state meet. At best, those meets are now pending a reschedule, if not a total scratch.

Three-time state medalist and Mojo standout gymnast Bridgett Pando remains optimistic. “The classes being suspended has had a huge effect on a lot of seniors, in general, because we have put in hard work to get to walk the stage. It’s heartbreaking to think that we might not have the possibility of sharing that memory with our fellow classmates.” With the threat of the gymnastics season being cut short, she continued “My heart hurts for my teammates, knowing that they have put in endless amounts of hard work and dedication towards our main goal (state). Regardless of what happens from here on out, we will continue to push through and be ready for anything new that heads our way!“

On the diamond, the softball and baseball teams from Permian, Odessa High, Midland High, and Midland Lee were set to start district play this week. Their season now looms with a huge question mark.  The Panthers’ head baseball coach Tate Criswell summarizes it best, “I just hope and pray we get to resume play soon.” – a sentiment reverberating across West Texas and the state.

The suspension of classes has affecting more than just the “Spring athletes”. Mojo football captain Chase Stell has concerns of how many of these days are going to have to be made up. “The more time we are out of class will be just more time added at the end. Graduation and summer plans will have to be changed, as well. If we are offered online classes during all of this, I’m afraid a lot of people would struggle and their grades will suffer.”

Members from the state Regional finalist boys basketball team from Permian echoed their concerns of a longer school year pushing into the summer.  Guard Sammy Garcia says, “I feel like it’s cool to have this long spring break, but that just means we might have to deal with school being longer.  I was looking forward to graduating on time.”.  All-District guard Keyonta Johnson is not only concerned about the school year, but the global status as well, “The world is going through some tragic things, and we need to stay strong and hold each other together.”  Nakavieon White, another All-District selection, shared his concern on a larger scale, “It’s crazy, but I think we can get through it all together.”

The young sports careers of local athletes (like many before them) were built on hard work, dedication, and the anticipation of their milestone “senior year”.  It’s unfortunate that theirs will be much different than many before them.  For this group, they (and their coaches, parents, and teammates) can only speculate what they would have accomplished.

“The struggle you’re in today is developing the strength you need tomorrow.”